What Do Moles Eat?​ 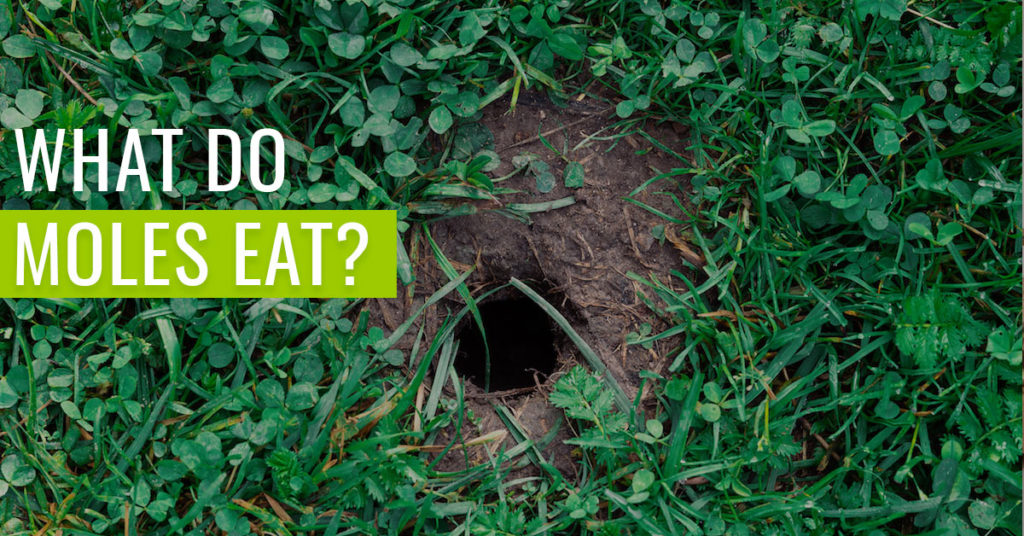 Moles are strange-looking creatures, they have pointed hairless snouts, they appear not to have any eyes or ears and they have huge front feet with claws and tiny rear feet, you must be wondering what on earth do moles eat?

You may just be wondering what they eat or you might have mole problems and need advice on pest control for moles.

Stay right here and read on because we have the answers to this question and we have plenty of advice on mole traps, catching moles and preventing moles in the first place. 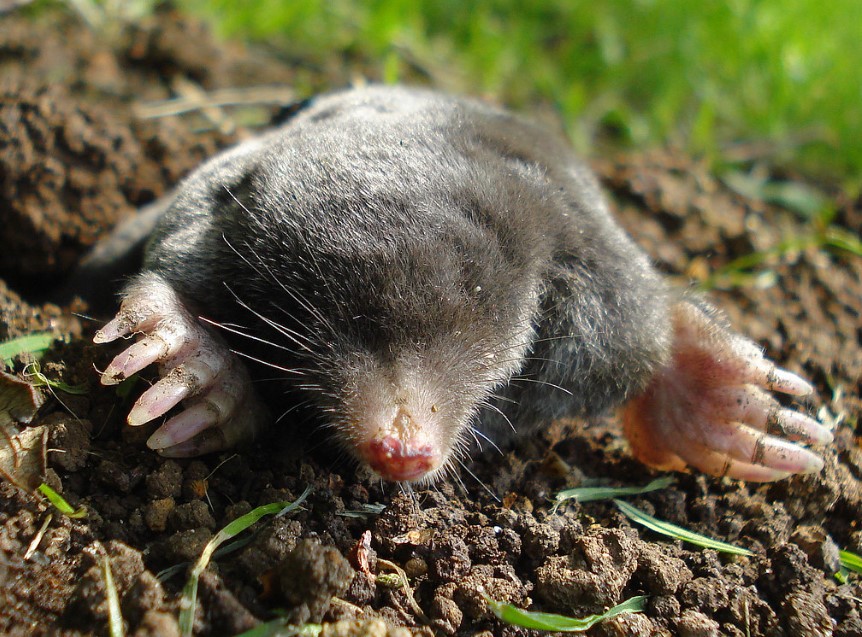 Moles are mammals; they are not omnivores, herbivores or carnivores, they are insectivores. They live on a diet of insects, they like various food sources and will search, kill and eat grubs, earthworms, millipedes, centipedes, and insect larvae.

Insectivores only eat the meat of insects.

Moles are small mammals weighing a few ounces and are about 8-10 inches long.

Moles are often thought of as rodents, they are not, in fact, they are closely related to bats.

They have tiny eyes and although they have small eyes they are not blind. Moles also have only ear canals they do not have external ears, the eyes and ears are covered with fur. A moles fur does not lay flat like other animals, it is raised which keeps the soil off them.

Most moles live for around 3 years, they have predators such as owls, stoats, buzzards, cats and dogs.

Moles are found in the northern parts of the United States. They are also found in Asia and Europe.

There are 7 different species of mole found in the States; the most common is the Eastern mole.

A moles body is adapted to be able to cope with low levels of oxygen and high levels of carbon dioxide underground.

In cold or dry weather a mole will dig deeper underground to find food.

A mole’s saliva contains a toxin that will paralyze worms so the mole can keep them stored for eating at another time.

Moles are able to tell the direction a smell is coming from and at the same time decide what the smell is. This ability allows moles to quickly find prey.

A vole will often take over an unused mole tunnel and use it to find plants for eating.

How To Identify Moles In Your Garden

The first thing you may notice is molehills on the lawn made of earth, as the mole tunnels the loosened soil gets pushed up to the surface appearing like volcanoes on the lawn.

You may notice areas of dead grass and dead or dying garden plants. This happens when the mole digs, as it does the mole causes damage to the roots.

How Can I Tell The Difference Between Mole Damage And Vole Damage?

Moles eat insects, whilst voles are vegetarian, they will only eat plants and their roots.

Voles will dig tunnels in the garden like moles do, however, they are slightly different, as a vole tunnels underground it smoothes out the earth making it finer on the surface of the lawn than the earth a mole pushes up to the ground, which will appear in clumps.

The mounds voles produce with soil are spaced closer together than mole hills, which can be ten feet apart.

Voles look very similar to field mice, only they have short tails like a mole. Voles grow to be around 5-8 inches long.

What Is A Moles Favourite Food?

Moles tend to have a favourite and that is earthworms, this food source keeps a mole hydrated due to its high water content.

A mole will keep a store of earthworms in its chamber ready to eat as needed, as a mole needs a good food supply to keep up with the energy needed to dig and search for food.

Why Don’t Moles Eat Other Meat?

Do you think moles ever want to eat other meat?  Probably not, and that is because they are just not built to catch other types of animals.

A moles pointed snout is built to hold and eat an earthworm, like an elephant’s trunk works like a hand, a moles snout aids the mole whilst feeding.

The star-nosed mole has tentacles that can hold its food while it eats it.

The digging feet of a mole are just not designed to catch and hold other animals.

Moles dig mole tunnels and the tunnel system leads off into chambers where the mole can rest. Moles spend almost all their lives underground.

Moles are solitary animals the only time they are with others is when they mate and have a litter of pups. When a mole comes to the surface in late winter it will be to find a mate.

A moles entire food source is under the ground, so in the 3 years of its lifespan, it will not have any other reason to come to the surface other than to mate.

Do Moles Have A Big Appetite?

Moles eat almost their entire body weight each day. Moles eat so much to provide the energy for the constant tunneling needed to get a food supply.

A mole can dig a whopping 100 meters of tunnels in a day if the soil is nice and damp.

Will Moles Ever Eat A Different Food Source?

Interestingly moles in captivity have eaten cheese and frogs!

If you are trying to bait traps you may be wondering if you can use anything else other than earthworms.

Peanut butter is often used in bait traps to catch field mice and other rodents, sadly other wildlife like peanut butter but moles are not fans of it.

What Do Moles Tend To Eat In The Garden?

Moles are underground-dwelling insectivores, it may appear as though they are eating the roots of the grass and your plants.

They do not eat plants, as a mole tunnels looking for its prey it makes molehills, the roots of the plants and grass become damaged and die. Moles constantly dig looking for their prey.

Moles are actually good for the ecosystem they kill and eat destructive insects and aerate the soil, making plants grow better.

Moles have a reputation for eating and killing plants and grass, people think they eat lots of different foods but they do not. They are one of the fussiest animals when it comes to food.

Why Do Moles Dig Mole Tunnels?

A moles’ food source is underground as a mole tunnels the earthworms and other insects fall into the tunnel providing food for the constantly feeding mole.

The tunnels also lead off to chambers where they rest and nurture their offspring. The underground system is made up of permanent and semi-permanent tunnels.

Some of the surface tunnels that moles make are not used for very long and are generally found in newly cultivated fields.

What Is The Fastest Way To Get Rid Of Moles In My Yard?

The best way to control moles is by trapping them, it is also the quickest way to get rid of moles in the yard.

We recommend a humane trap and that way you can release the mole unharmed back into the countryside, take the mole at least 4 miles away from your home otherwise, it will find its way back to your yard.

You can buy online snap traps to get rid of moles, they either have spikes on them or rely on pressure. The trap will need to be baited with worms or grubs.

Place a bucket over the top to protect a passing animal or wildlife from injury.

Always read the instructions and directions for the correct placement of the traps.

There are a few types of pest control you can use here are some of the main types to try.

Ultrasonic devices will deter moles they should be placed around the garden in places of mole activity. The sound emitted from them cannot be heard by humans.

The use of a grub lawn treatment will reduce grubs in the soil but it can affect the amount of grubs available for another animal.

Castor oil is detested by moles. You can make up a spray to use in the garden, mix together 3 parts castor oil, 1 part dish soap, add 4 tablespoons of it to a gallon of water and spray on the soil of an active mole run.

You can buy ready-made products containing castor oil, made to repel moles, this will save you from making it up yourself.

Another form of pest control to try is plastic worms coated in Bromethalin, place the worms in an active mole run.

You can also try sprinkling cayenne pepper, coffee grounds or tobacco near the molehill.

There are some pest control methods that do not work, placing mothballs will not repel moles, neither will bleach.

How To Prevent Moles

There are several things to try to prevent moles here are some ideas for you to try.

If the soil in your yard contains a lot of grubs that moles prey on, you can try using beneficial nematodes to kill the pests.

To protect your plants from mole tunneling, dig a trench around them and line them with small holed wire mesh, or fill in the trench with rocks, this will be a long term form of protection from these digging pests. The barrier also works to keep pocket gophers away.

Keeping mulch, wood, and weeds cleared will reduce the moisture that would otherwise attract grubs, insects, worms and moles.

Keep the lawn cut short and try not to water too often, the moisture will attract the damp loving moles.

We hope that we have answered the question: what do moles eat?

We also hope we have given you an insight into how to protect against tunneling moles from damaging roots, and how to get rid of moles whether you kill them or remove them humanely.

If you have any questions for us please feel free to drop us an email, we do our best to respond as quickly as possible.

Why not take a look at the rest of our website where you will find useful tips and advice on a wide range of pests.

And remember don’t go making mountains out of molehills!