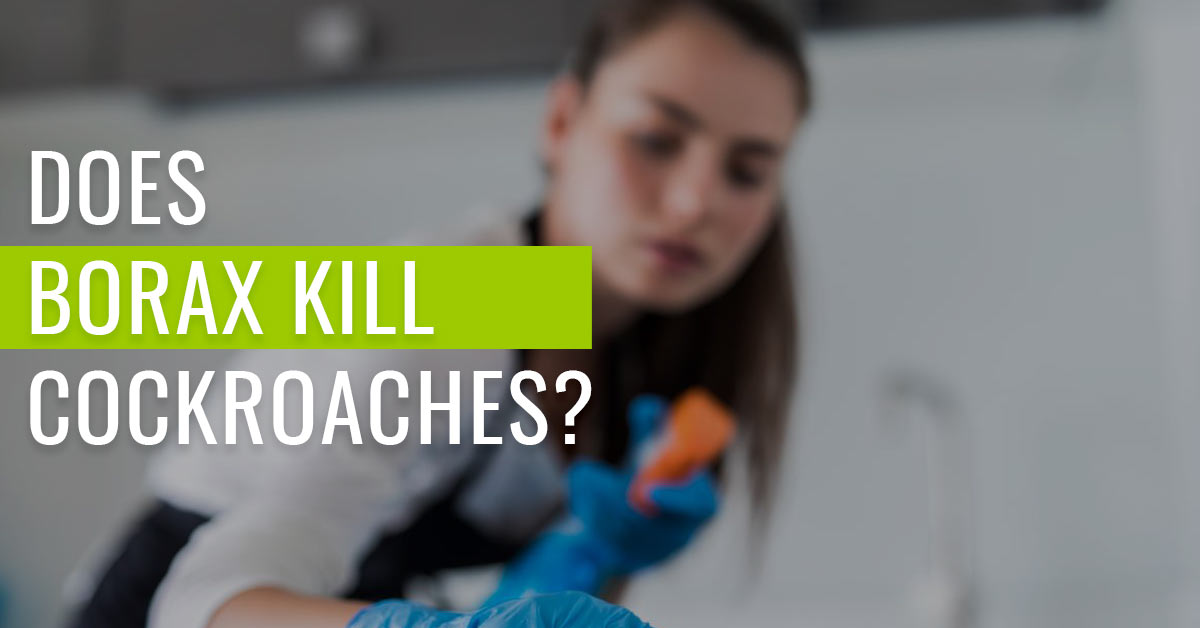 Borax has a reputation for being a one-size-fits-all solution for many household chores. It is great for cleaning the home, doing the laundry, and even caring for plants. But does borax kill cockroaches? If you’re dealing with a cockroach infestation, chances are that you’ve heard that this magical chemical can solve your problem. Let’s see how – and if – it really works.

Borax is a chemical compound also known as sodium borate. It is a common ingredient in detergents, cosmetic products, and many other household products. It is generally not considered a toxic substance, which allows for a wide variety of uses. However, if ingested on its own and in higher amounts, it can have certain negative consequences, such as nausea and vomiting, stomachache, diarrhea, and more. Although it may have lethal consequences, that would require substantial amounts of borax.

What Is Borax Used For?

There are many different applications of borax inside and outside of the household. Some of these include:

Where Can I Buy Borax?

Borax is likely readily available in your nearest Wal-Mart or other grocery store chain. You should be able to find it in the laundry detergent aisle. If not, any well-equipped hardware store should sell it, as well. Another option is to buy borax from Amazon.

Since borax comes in several different shapes and sizes, you should know which one to choose. For the purpose of killing cockroaches, powdered borax is your best bet. 20 Mule Team is one of the most popular and most readily available borax brands. As far as the package sizing goes, we’ll leave that choice up to you. Even buying the largest package won’t be a waste, since you can use the powder for things other than getting rid of pest infestations.

In short – yes, borax can kill cockroaches. However, in order for it to be effective, the cockroach has to eat it. Once it is ingested, the substance will damage the gut lining of the bug, effectively poisoning and killing it. What’s more, even if not ingested, borax will slowly damage the exoskeleton of the bug which results in dehydration.

Keep in mind, however, that borax doesn’t kill cockroaches instantly. It takes a while to work, so be prepared to dedicate some time to looking for and removing dead bugs if you opt for a borax-based cockroach solution.

How to Use Borax to Kill Cockroaches

Using borax to kill cockroaches is pretty easy. Since the chemical works best when ingested, a great method would be to mix it with something a cockroach is likely to eat. However, there are several different techniques you can use, so let’s take a look.

One of the easiest ways to kill cockroaches with borax is to sprinkle it on a piece of food. Ideally, this should be something the cockroach will be able to smell, although pretty much any type of food will work (cockroaches will eat basically anything organic).

Sprinkle some powdered borax on a spoonful of peanut butter, a piece of orange, a slice of onion, or whatever else you have at hand. Place these pieces of food on cardboard plates or tupperware lids and put them somewhere where they’re likely to attract the roaches – near the kitchen sink, in the bathroom, or wherever else you noticed cockroach activity.

Killing Cockroaches With Borax and Sugar

If you’d rather not have pieces of food scattered all around your home, don’t worry – there are other solutions. Mix equal parts powdered borax and some regular white sugar and dust this mixture around every crevice and corner you believe the cockroaches might be hiding in. The sugar will attract the cockroaches, and they will eat borax along with it, eventually dying.

Once you’ve noticed a drop in cockroach numbers, don’t forget to clean up the mixture. After all, you don’t want to attract even more pests with all that sugar scattered around your home.

Aside from borax, baking soda is also great at killing cockroaches. When a roach eats it, baking soda causes gases inside the bug, which eventually makes it, well, explode. Much like borax, this solution doesn’t work instantly, so you might keep finding dead bugs in the weeks to come.

Since both borax and baking soda are effective roach killers, it might be somewhat unnecessary to mix the two, especially if you’re not dealing with a giant infestation. That being said, there aren’t any downsides to doing so, either. Our only recommendation is to still use some sort of bait – either sugar or food, to actually attract the roaches to the mixture.

How to Kill Cockroaches Using Borax Only

We understand that dusting sugar all over your home isn’t a great alternative to leaving pieces of food around. Luckily, using borax without any bait is still an effective way to kill cockroaches, although it may take a little longer.

But wait, didn’t we say that borax has to be ingested in order to work? Well, yes. However, cockroaches have a certain routine called preening. Basically, just like birds clean their feathers with their beaks, cockroaches also clean their exoskeleton by eating whatever is on it. So when a cockroach walks over a surface sprinkled with borax, the powder will stick to its legs. Once the bug gets to its hiding spot, it will preen, ingest the borax, and eventually die.

However, this method will take even longer to work, since the roaches won’t be attracted to any particular surface covered with borax. Basically, you have to count on them eventually walking over your borax trap while trying to get someplace else.

What to Know When Using Borax to Kill Cockroaches

Borax does have a reputation for being one of the safest and healthiest solutions to dealing with cockroach infestations. However, this doesn’t mean that certain precautionary measures shouldn’t be put in place. After all, ingesting borax can cause side effects, as we mentioned above.

Sure, you may need to eat a large amount of borax for it to cause digestive and other medical issues, but that amount is much smaller for dogs, cats, and children. So if you want to preserve the health of all your household members, including the furry ones, make sure to keep them away from the traps. It would be ideal not to let your pets into the rooms where you sprinkled borax at all. If that’s not possible, pay close attention to them and prevent them from going near the traps.

If your children are older, explaining what the traps are should be enough, but keep in mind that toddlers and younger kids might not grasp the notion of toxicity and let curiosity take over. If you’re not absolutely sure that your child won’t go near, touch, play with, or eat the borax you sprinkled, it might be a good idea to opt for a different kind of solution, such as store-bought roach sprays or essential oils.

Sometimes, especially with very large infestations, no home remedy will be effective. What’s more, some research suggests that certain cockroaches have developed an aversion to glucose, making all sugar-based baits basically ineffective. In other words, no matter how hard you try to kill cockroaches on your own, all your efforts might end up being in vain.

Luckily, getting rid of cockroaches in your home is not something you have to do alone. Professional licensed exterminators can do it for you! Not only will you be able to delegate the job to someone else, but you will also know that the work will be done efficiently and effectively.

Professional cockroach exterminators have the right equipment and skills to get rid of cockroach infestations of any size. What’s more, they will be more than happy to share some tips with you on how to ensure the pests don’t come back.