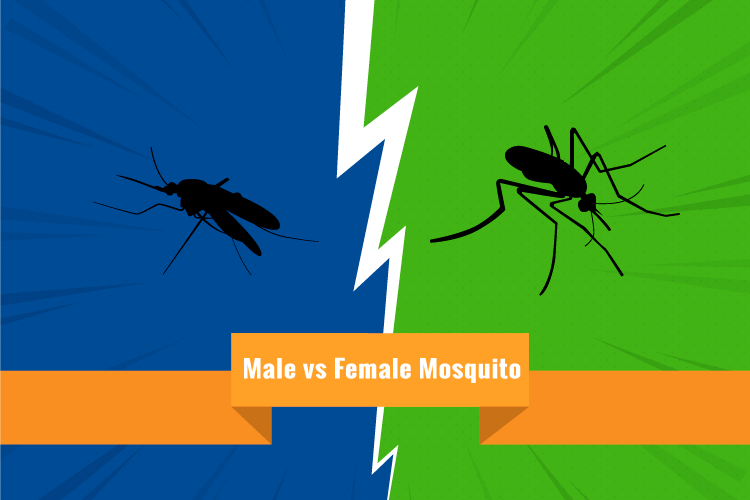 Mosquitoes are surely one of the most annoying insects to have around. The worst thing about them is that they have a series of diseases that they carry, which can easily transfer to you if you get bitten by one of them. While we take all mosquitoes under one head, you should know that the ones annoying you aren’t both male and female mosquitoes.

Here, we help you understand the difference between male and female mosquitoes, so that you are able to determine which one is really to be blamed for all the trouble. Let’s have a look at the things we will cover:

Things You Should Know About Male Mosquitoes

Male mosquitoes are often equally blamed for all the trouble that mosquitoes cause. But the truth is that male mosquitoes are pretty harmless, as they stay away from humans. When it comes to their appearance, you must know that they look pretty similar to females, and there is no clear way of telling them apart.

The only difference that you will be able to see is through microscopes. They are different in terms of the sound they make because of the Johnston’s organ in their bodies. You will also find that they are a bit feathery when you look at them.

Things You Should Know About Female Mosquitoes

Female mosquitoes are the members of the species that lay eggs. While there is no way to tell males and females apart through the naked eye, you should know that they are different when looked at through the microscope.

You will find these to be longer and thinner than the male species, and will have a needle-like look. More than that, you will find these females roaming around all living things that have blood running in them, as they feed on them for the development of their eggs.

The Differences Between Male And Female Mosquitoes

Let’s have a look at the major differences between male and female mosquitoes.

While this might not be visible to you normally, when looking through a microscope, you will find that they are completely different from one another.

Even though they are perhaps one of the smallest insects, the difference between the sizes is quite evident.

The lifespan of mosquitoes starts once the eggs are laid. These can go up to quantities of 300 in a single go. They take about four days to two weeks to get to adult size, and then they will mostly remain in the same area for their life. However, there is a possibility for some of them to travel about 20 miles further for food intake. Males survive for about two weeks, whereas females can survive for up to a month.

A female mosquito’s proboscis is created to ensure that they are able to feed off mammals once they are impregnated. The females are the only ones that feed on blood, and only after mating with males.

The reason behind feeding on blood is to ensure the intake of protein and energy for development of their eggs. It is quite an interesting observation. When it comes to males and females, both consume their food through nectar, as it is their primary source of food.

Along with this, you should know that females’ buzzing sound is higher than that of males.

Which Of The Two Should You Be Wary Of?

The ones that will be surrounding you and biting – and that you should get rid of instantly – you are female mosquitoes.

Along with this, you should make sure that you are taking all the relevant precautions when it comes to keeping yourself safe. Some precautions include:

There are plenty of other measures that you can take to keep yourself safe from mosquito bites.

Whose Bite Should You Worry About?

When it comes to the bite of the mosquitoes, you should know that the only one biting you is the female one.

Males have no tendencies of biting humans, as they do not have to reproduce. So, the possibility of them biting you is zero.

There are plenty of diseases present in the world that start with a mosquito bite. One of the more prominent is malaria.

The sting from a female mosquito carrying the disease can bring about a lot of trouble. Many people get infected with malaria in developing countries because of the excessive presence of female mosquitoes.

Differentiating between male and female mosquitoes is not difficult at all when looking under a microscope. However, you probably won’t be able to tell a difference with your naked eye.

No matter what, make sure that you keep safe from being a target of these female mosquitoes by incorporating the right preventative measures in your life. Use the right services, mosquito netting, and more to keep yourself safe from mosquito bites.