Where do Flying Termites come from? 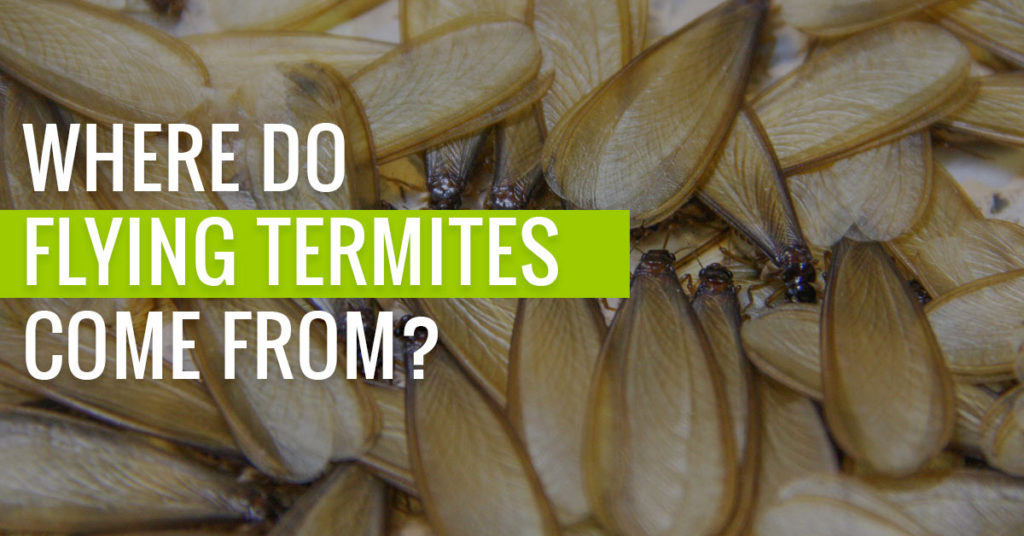 While this not be the best revelation for an already detrimental pest problem, there are some termites that can take flight and make your day worse.

Before we go on, if you see a swarm of flyting termites in your home, you should call your local pest control service immediately. If there is a swarm, then you likely already have – or, soon will have – a termite problem in your home. And unfortunately, termites can cause detrimental structural damage to the house.

With that in mind, here at Pest Resources, we wanted to bring you a pest-file of everything you can expect with flying termites including where they come from, what they look like, and why they shed their wings.

What Are Flying termites?

America has around 50 species of termite that can cause damage to homes and health. The most prominent around North America are the Subterranean Termites, Dry Wood Termites, and Dampwood Termites.

Flying termites, however, are not a breed of termite. Part of the Isoptera family, termites have various forms and bodies that directly correlate with their role in the colony. Every termite colony has different roles (also known as a ‘caste’) for the termite to play.

The winged termites have the role of creating a swarm, finding a new home and, becoming the next King and Queen of the new colony.

With each colony, the Queen’s first year can consist of producing around a hundred to a thousand eggs per day. Then, when these eggs hatch, it can take around two to four years for the colony to mature before it is time to create a new swarm. During this time, they’ll be eating away at your house’s wooden support structure.

The larva has the opportunity to take on any of the three roles: worker, soldier, or alate. But this will depend on the pheromones and temperatures they are exposed to as an egg.

Flying termites are often mistaken for flying ants due to their size. However, flying termites can be quite easily distinguished with a good eye. There are various things to consider:

As these are most likely the first thing you will see, you’ll note the winged termites have two pairs of long wings that are all equal in length. The flying ant has two pairs of wings with differing lengths. The wings are often white or translucent in color with the veins easily visible.

While harder to see, it is useful to know the antennae of the flying termite are short and straight. While the flying ant, for comparison, has curved or elbowed antennae. These will also be slightly longer.

Color varies between castes with the termite. So, while the flying termite will generally have a yellow, brown, or tan body, their worker and soldier counterparts are often black or red. If you see a flying termite, there is no guarantee that you have infestation, but if you see a worker or soldier in your home, then you will already have a pest problem on your hands.

Termites don’t have constrictions between their body parts, instead looking like one long pellet of insect. So, their waist is not prominent, unlike the flying ant, who has a distinguished waist after the wings and legs.

Why Do Termites Swarm?

Flying termites are bred with one aim and purpose in life: to become a new King or Queen in order to develop a new colony.

After 2 to 4 years, their current colony will have matured. And, while their queen can live as long as 25 years, the average worker and soldier will vary in lifespan from around 12 to 24 months.

Once the colony has matured, the alates will flee the nest to swarm with other termites of the same species but different nest. During this swarming ritual, two termites will come together, allowing a male to fertilize a female.

When the female is fertilized, the termites land and shed their wings. They then crawl to find a home to create a new colony. The termites look for a home that is warm, moist, and undisturbed. Often these choices lead to wood and timber framing in a household.

What Are the Warning Signs of a Winged Termite Infestation?

The first thing to concern yourself with is understanding the signs of a termite, so further action and inspection can take place.

Termites love to eat into wood and burrow through it, too. So, you might see cracks in any wood walls or floors, small holes, or maze-like tunneling.

As mentioned, an alate will discard their wings after they have settled as a Queen or King in their new home. Often, these wings can be found around doorways, windowsills or other entry points they can get through.

Tubes in the ground surrounding your home or shed are a clear sign of an infestation. These holes are normally pencil-sized and, while not always the cause of termites, can be a good indicator.

As termites love to eat through wood and support beams, they’ll often leave a trail in the form of sawdust and poop. And, while the settling of houses can cause sawdust piles on their own, look for continuous piles as well as the termite poop.

What Damage Can Termites Cause to My House?

After you have found any of these warning signs, it is important to contact an exterminator or pest control service alongside a surveyor. This way they will work together to determine the extent of damage and what needs replacing after extermination.

These damages come to around $5 billion in the US each year, so it’s always important to keep a look out and act fast. Potential damages in your house could be to the following areas:

How Can I Get Rid of Flying Termites?

Of course, your first course of action should be to call your local pest control service, but we understand this sometimes isn’t an option. That’s why here at Pest Resources, we’ll give you some tips and tricks to dealing with your flying termite infestation on your own.

Many homeowners opt for heading to their local Home Depot for some insecticide such as Imidacloprid or Fipronil. Adding these to the soil around your home could help to kill your termites whenever they venture out for food. However, this will not kill the termites that don’t leave the colony.

Another popular choice are termite baits which work to lure termites with appetizing smells. Then, they will be slowly killed using a powerful insecticide which is taken back to the colony to kill the Queen and King.

A final choice for US residents is foam or dust agents. When these are pumped or injected into the areas of concern, they will quickly reach the colony to exterminate them all.

And there you have it, a complete guide to tell you that flying termites do exist, why they exist, and what to do if you believe you have them in your home.

Don’t forget to keep checking in to Pest Resources to find out more information about dealing with your home infestations!