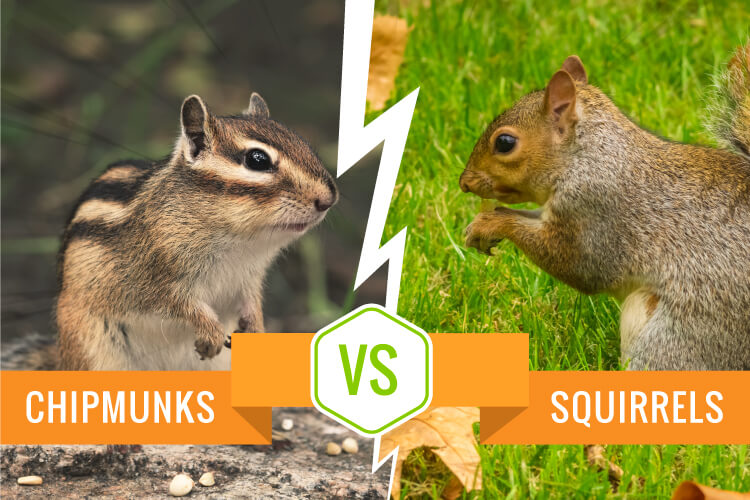 Across the United States, and especially in suburban areas, you’ll find lots of squirrels and chipmunks running through the trees and sometimes even in your attic.

In this Pest Resources guide you will learn about the biology of both animals as well as the following:

But what are the differences between these two animals? And when it comes to pest control, does it really matter?

What's in this guide?
Are they related?
Main differences
Which is worse? Chipmunks or Squirrels?
Do they get along?
Can squirrels and chipmunks mate?
Fun facts about Squirrels
Fun facts about Chipmunks
Summary

Both are members of the family ‘Sciuridae’, a family that consists of small-to-medium sized rodents.

The squirrel family includes: marmots, prairie dogs, and woodchucks, amongst other rodents. Even though both animals belong to the same rodent family, there are some major differences between the two.

Keep reading to find out what these differences are!

Main differences between these two animals:

Fur
Although both of these animals are covered in fur, they are fairly easy to tell apart due to the different color of fur. The average chipmunk has brown fur with yellow, black, and brown stripes starting at the head to the tail. Whereas the average squirrel only has lines or markings on their back. Their fur is normally brown, gray, or reddish brown in color. That said, some squirrels are not striped. 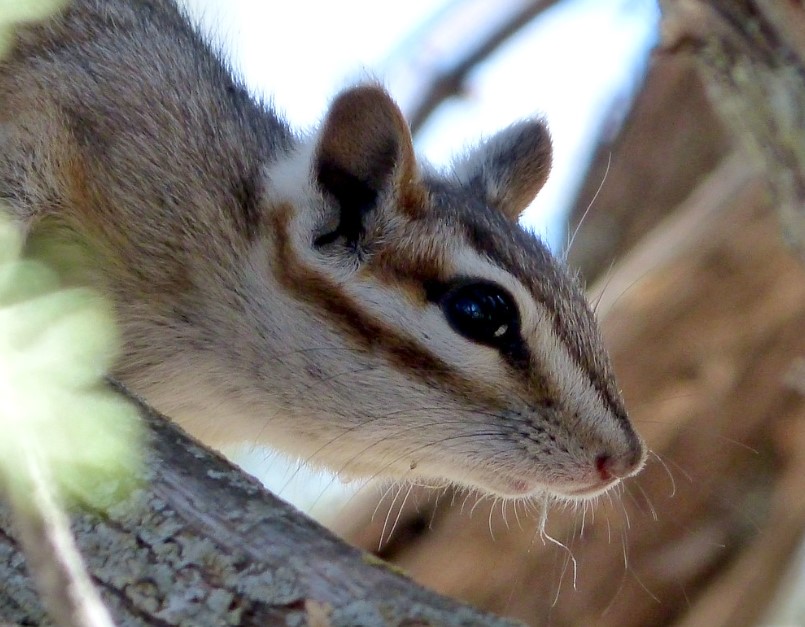 Size
Squirrels normally appear to look larger than the average chipmunk. The size of the average squirrel differs from species to species, with gray squirrels measuring from 17 to 20 inches, and the average weight of 1.5 pounds. Normally, squirrels have a slender shape, their eyes are larger, and their tails are more bushy. The average chipmunk has a smaller body, ranging from 7 to 9 inches in length and weighing up to 1.8 ounces. Their eyes are much smaller than the squirrel, but their tails are equally as bushy.

Vocals
Both are capable of producing sounds, normally to alert other members of their community to any nearby danger. The the average chipmunk produces a clucking noise similar to bird noises, which is known to be high-pitched. This is different to the sound the squirrel makes, which is similar to the quack sound a duck produces, and sometimes they produce a whistling sound.

Diet
Both have an omnivorous diet. The diet of the squirrel depends upon the species. Mostly they eat nuts, seeds, and fruit, but they are omnivores. For example, Gray squirrels have been found to eat insects, snails, bird eggs, and even animal carcasses. This normally happens if their regular food source is in low supply. Chipmunks also have an omnivorous diet which consists of seeds, nuts, buds, and fruits. Not only this, but they were also found to eat grass, shoots, fungi, insects, small frogs, and even bird eggs.

Nest
A big difference between these two animals is how they build their nests. Squirrels prefer living above ground, especially tree squirrels who are most commonly found in tree trunks. This causes a pest problem for a lot of homeowners, as they have been known to build nests in garages, chimneys, attics, and their favorite place being bird feeders. Chipmunks, on the other hand, prefer to hide underground and dig their burrows usually 30 ft. deep.

Lifespan
Squirrels are born blind and hairless, and are dependent on their mother for at least 6 weeks. They can survive between five to ten years in the wild, though due to threats such as diseases, human interaction, and predators, this is normally much shorter. Chipmunks have been reported to survive up to 3 years in their natural habitat, or up to nine years in captivity.

Reproduction
Squirrels are able to mate twice a year, the first being around the end of February, lasting until May, and the second occurs at the end of spring. Squirrels are able to begin mating at the age of one. Most squirrel species will have two litters, each consisting of 2 to 8 babies called kittens. Chipmunks have a similar breeding pattern, but they are commonly known to give birth to 4-5 babies at a time.

Habitat
Squirrels are capable of surviving in lots of different types of habitats including tropical rain forests, open woodlands, parks, and suburban regions. Two places they do not reside are frozen polar regions and dry deserts with no vegetation.

The average squirrel usually lives within holes in trees left by woodpeckers. They prefer to live up high within trees, and their nests are filled with small twigs, leaves, most and other organic materials.

Similar to squirrels, chipmunks too like to live in woodland, parks, suburban and urban areas. However, their perfect habitat choice would be a deciduous woodlands containing lots of stumps and logs.

Due to chipmunks preferring to live underground, they dig burrows up to 30 ft. deep and comprised of complex tunnels and food storage sections, with one central nest filled with leaves, twigs, and moss.

Which is worse? Chipmunks or Squirrels?

Squirrels are most likely to cause you problems compared to chipmunks. This is due to their infamous ability to chew through power lines. Squirrels have four front teeth that continuously grow at a rapid rate of six inches per year. This helps their incisors endure their regular gnawing. Squirrels are famously known for causing power outages and blackouts all across the United States, including a brief power outage that shut down the NASDAQ stock market in 1987 and 1994.

Not only power lines, Squirrels are known for stealing all the birdseed you’ve put out for the birds. There are even squirrel proof bird feeders available for purchase. Not only are they stealing the birds feed, they are commonly found to invade your attic and cause damage to the interior structure.

Chipmunks can be a pest due to the damage their burrowing activities cause. They can cause structural damage to retention walls, patios, and slabs. Not to mention Chipmunks carry fleas, so if they’ve been inside your home, you run the risk of a fleas infestation.

Do they get along?

Squirrels and chipmunks generally don’t come in contact with one another. Their dietary needs are different enough that they are not competing for anything.

They make their homes in different locations below and above ground, so they have little to no interaction.

Can squirrels and chipmunks mate?

Short answer is no. Biologically it’s probably possible, but there’s no evidence to support this claim. Although they’re both members of the Sciuridae family of rodents, they have very little in common, certainly not enough to attract them to one another.

Even with learning their differences, it still can be hard to tell them apart due to their size. But here at least is an outline of the main differences between Chipmunks and Squirrels, and some interesting facts as well.