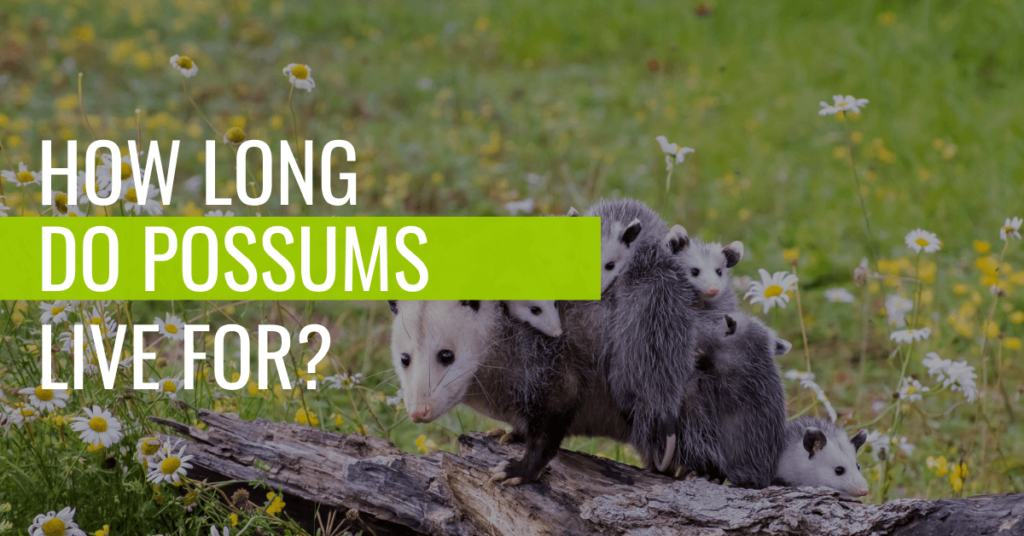 How Long Do Possums Live?

Most of us have had the lovely experience of hearing weird, sometimes even spooky, noises followed by rumbling and odd screeches during the night. The process might sound familiar; You take out your flashlight, muster up the strength to face whatever is emitting the noise from your porch or yard with shaky hands… only to find a (bunch of) possum roaming around in the trash, looking for its next snack.

Depending on personal taste, some people find opossums cute, even adorable, while a lot of people see them as ugly garden pests that disturb their peace. In reality, opossums are very interesting and goodhearted animals that tend to be misunderstood.

If you live in an area where the population of possums is high, you likely come across more dead possums than live ones. If you’ve ever wondered why that is, you are at the right place. Here, we are going to tackle how long do possums live, what they commonly die from, as well as general facts regarding the lifespan of a possum.

Read next: What do Possums eat?

Opossums belong to the marsupial family and they can be found in North and South America. There are over 110 species of opossums, ranging across the Americas. Even though we also call opossums “possums”, they should not be confused with the possum, which is an Australian order of mammals that are more closely related to kangaroos.

Read next: How long to Squirrels live for

Didelphis Virginiana - What You Need To Know About The Virginia Opossum

The natural habitat of the Virginia opossum (Didelphis Virginiana) was originally in South America, but started to move up during its evolutionary history, all the way to Canada. Research has shown that the reasons for this were most likely global warming and food availability.

The Virginia opossum is the most common opossum in North America, and most likely the type of opossum that you have encountered in your life. A fun fact about these wild animals is that they were artificially introduced to California between 1890 and 1900. No explanation was given at the time when this was done, although many assume it was because of the fact that they were popular hunting quarry, as well as a nutrient meal.

When it comes to their size, they are usually the size of a heavier cat. Their body is usually somewhere between 24 to 26 inches long. The Virginia opossum is often compared to both cats and rats, not only the size, but thanks to their rat-like/cat-like behaviors and rat-like tail. It’s thin and usually between 20 cm and 60 cm long.

Like many other marsupials, their tail is actually a prehensile tail, which allows them to grasp and wrap around tree branches. This animal species is one of the only species of animals that has opposable thumbs, allowing them to climb, grab things, pick tics, and so on. 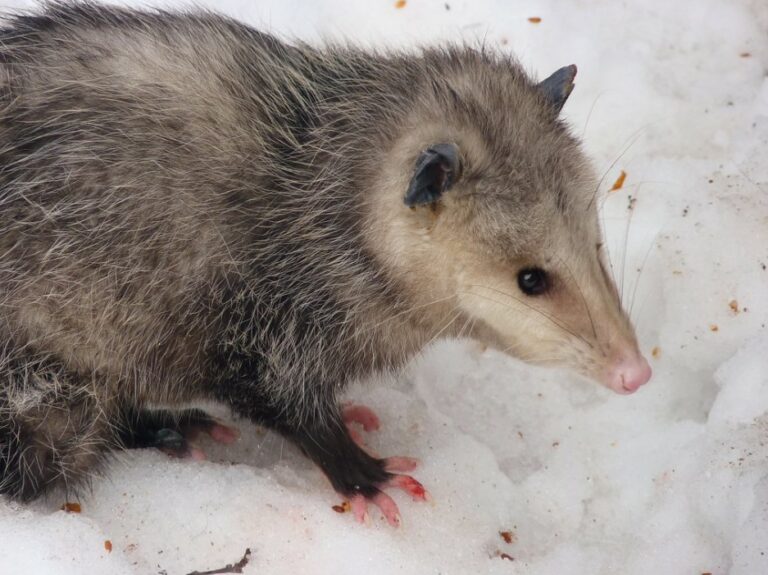 What is the average life span of an opossum?

On average, opossums have a short lifespan. Their average lifespan ranges from 1 to maximum 3 years in the wild, and 2 to 4 years in captivity. Most of them, sadly, don’t even survive their first year, let alone die of old age. The oldest opossum, found in the wild, was 3 years old. Captive opossums live slightly longer, with the oldest opossum recorded being 4 years and 5 months old.

Read next: How long do Ants live for

Female opossums can give birth to 25 young at a time. The baby opossums are also called joeys and in this stage, they might remind you of jelly beans. However, a percentage of the young possums don’t make the trip safely in the mother’s pouch. In order to survive, the young possums must attach itself to the nipple, otherwise, the baby opossums die. In each litter, about two thirds of the juvenile opossums live, while one third of the possums die because of this.

Alongside a wildlife rehabilitator, for example, these marsupials may get to live until 4 years when receiving the proper nutrition and care. Possums are not exactly known for their refined diets, and some experts claim that their (un)limited diet might also be to blame for their short average lifespan.

Why do possums live so short?

The simple answer is: predators, a lot of them. The complicated and long answer is that these wild animals are not under selective pressure to develop apparatus that allows for a longer life expectancy.

Opossums are extremely adaptable by nature. They can survive almost anywhere in America, even in places and during seasons that they don’t like; particularly the cold.

An opossum’s diet means eating almost everything: from trash, to dog food, insects, mice and even cottage cheese. Possums can survive snake bites that would be lethal to most, and are immune to bee stings. Yet, it rarely lives a full normal life, in accordance with their life expectancy.

Another factor that affects the answer to how long do possums live is their reproduction cycle. Once these marsupials reach sexual maturity, their adult counterparts will be seen as having performed their duties.

For some possums, this essentially means that they will die soon, as their main mission has been completed.

It’s a bit funny that opossums are known for their amazing immune system (that is practically resistant towards Lyme disease, rabies, snake venom, etc.) yet rarely live past 2 years?

You have likely heard of the expression “playing possum”. If you haven’t, it refers to when a possum is feigning death in order to lure off their many predators.

When a person is “playing possum”, they are essentially “play dead” because they want to avoid something usually uncomfortable or awkward, staying silent or stiff. When a possum does this, it’s a defense mechanism that can save their life.

It’s very hard to tell whether the opossum is actually dead or play dead since they mimic death so well.

Opossums can do that for up to 4 hours. During this apparent death, you will see their tongue hanging (known as tongue lolls), their body will be curled up and limp, their breathing will seemingly stop and their mouth will start drooling.

However, not even this tactic helps possums raise their life expectancy.

If the opossum does this well enough, the potential danger will lose interest. However, playing dead is not something that is calculated nor something that these marsupials can control.

It’s an involuntary behavior that occurs when the opossum perceives some kind of danger. If you see a possum that’s playing dead or seems dead, it would be best to leave it alone.

You don’t want to accidentally have it buried alive.

To summarize, the answer to your question “how long do possums live”, isn’t really cheerful. Possums live very short, but boy, oh boy, they are definitely one animal with compelling features and interesting qualities.

Now that you know a bit more about how possums live and how possums die, have your feelings towards them changed a bit?

The next time that you see a possum, keep in mind that it’s most likely somewhere between 10 months and 2 years old, and that it’s looking for ways to survive, away from predators.

Don’t make the short life of this wonderful species any harder than it needs to be. 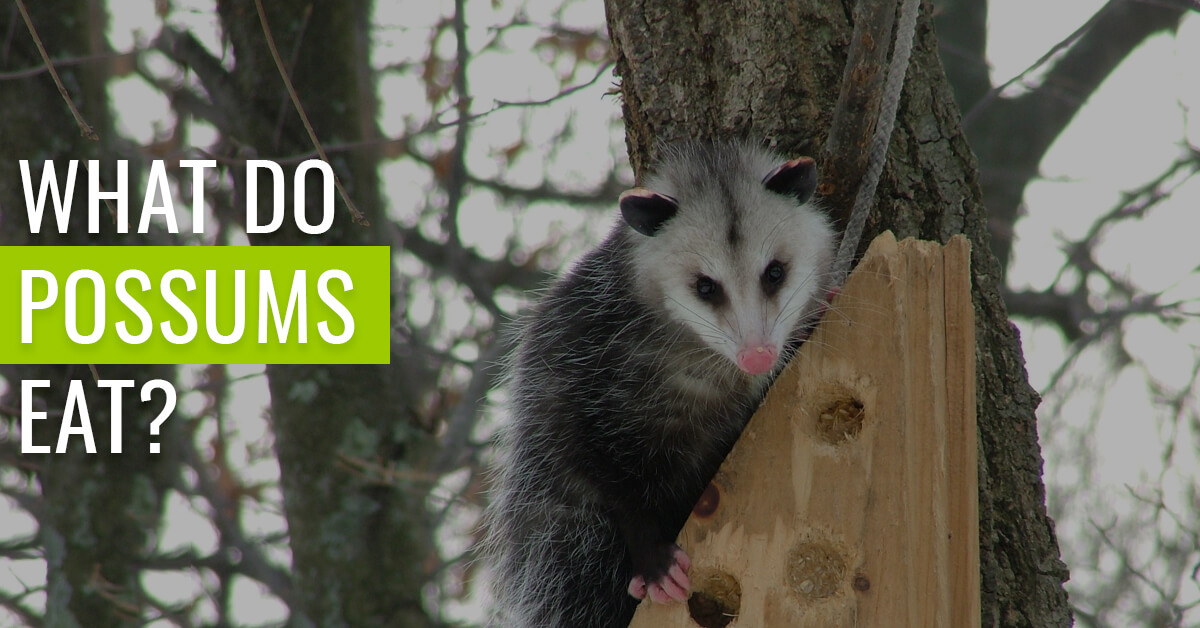 What do possums eat?

What do possums eat?